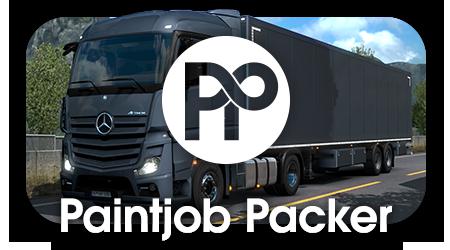 Description:
Paintjob Packer is a lightweight mod making tool for Euro Truck Simulator 2 and American Truck Simulator. It allows you to generate simple paintjob mods, with a focus on mods that support multiple vehicles.

Features
Support for player-owned trailers, including those from DLCs
Support for trucks using the newer accessory-based paintjob system, like the Scania S and MAN TGX Euro 6
Support for as many vehicles as you like in a single mod
Built-in support for over 60 modded trucks and trailers
Support for separate paintjobs for each cabin of a truck, in case a single texture doesn’t work for all of them

1. Generate base files using Paintjob Packer
Paintjob Packer is made for paintjob packs, but you can also make a single paintjob
Choose between separate paintjobs for each cabin, or a single combined paintjob per vehicle
Combined paintjobs cut down on mod size by only needing one file per truck, but your design might not work perfectly across all the cabin sizes
Separate paintjobs let you tweak your design for each cab size, but your mod will be bigger due to multiple (usually 3) files per truck
The optional cabin unifier system gives you the best of both worlds, but is more complex to use (only available when using separate paintjobs)
Internal name must consist of only lowercase letters, numbers and underscores. It must be 12 characters or fewer (10 if using separate paintjobs) and unique – two different mods that use the same internal name are incompatible with each other
2. Replace mod manager files
mod_manager_description.txt and mod_manager_image.jpg
The description already contains a pre-generated list of vehicles supported by your mod
The image must be a 276 x 162 JPEG
3. Replace icon
material/ui/accessory/_icon.dds
Must be a 256 x 64 DDS
If you want your icon to match the vanilla paintjobs, use the placeholder image as a guide for size & shape
4. Make main vehicle files
vehicle/truck/upgrade/paintjob// (each “cabin” DDS) and/or vehicle/trailer_owned/upgrade/paintjob// (each “body” DDS)
Using templates is recommended, I have a pack you can download
Save each DDS as DXT 5 with mipmaps
For consistency’s sake, Cabin A is always the biggest cabin size, then Cabin B is smaller, then Cabin C is the smallest. If the 8×4 chassis uses a separate cabin, it’s called Cabin 8
Some trucks have fewer than 3 cabins, and some mods have more than 3
You’ll need to replace every cabin DDS there
5. Make accessory files
Every DDS not replaced in the last step
Only necessary for trailers and some trucks
Not all accessories need templates, if you just want to change the colour of a part simply re-colour the placeholder file that’s already there
If using the cabin unifier system

6. Make additional DDS files if needed
Each truck will only generate with cabin_a.dds by default, if you need additional sizes you’ll need to make additional DDS files
You only need to make additional files if your design doesn’t work on a certain-sized cabin, most paintjobs will work fine with just the one DDS
Make sure additional DDS file names match an existing TOBJ, e.g. cabin_b.dds is okay, but cabin_small.dds is not
7. Edit existing TOBJ files to point to your new DDS
Open the TOBJ using a hex editor and edit only a single letter near the end, e.g. turning cabin_a into cabin_b
Multiple TOBJ files can point to the same DDS, so you could have one DDS for cabins A & 8, and a second for cabins B & C, for example
8. Run the cabin unifier
If any files are missing or named incorrectly, the unifier will let you know
Don’t edit unifier.ini, it might cause the unifier to work incorrectly
The unifier looks at your TOBJ files to see which cabins you need and which you don’t, then edits some files in the def folder
You can only unify once, so delete Cabin Unifier.exe (or unifier.py) and unifier.ini afterwards